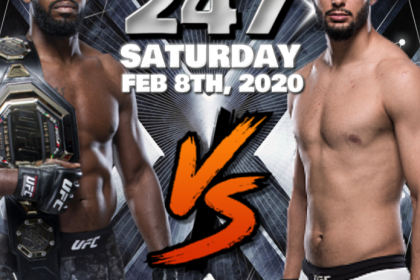 Jon Jones holds a title with the Ultimate Fighting Championship, earning it quickly after signing a deal with them. He specializes in mixed martial arts. Many consider him the best mixed martial artist in the world.

Jon Jones’s sports background tells all. Holding records in the light heavyweight class, Jon Jones dominates the field with the most wins and the longest winning streak. Before he signed with UFC, he involved himself in high-school wrestling and football. The man is a tank, and even his coaches knew at the time.

No wonder the man is technically undefeated in UFC, except for that one mishap. Jon Jones fights like a monster, but there is one person who lived to tell the tale. A fight with Matt Hamill took a turn for the worse. Jones lost his undefeated status from too many illegal moves.

Technically, Jon Jones is not undefeated in terms of clean wins. The MMA professional has never submitted or directly lost a fight, but he has experienced a defeat at the hands of the judges. Jon Jones threw some illegal blows at Matt Hamill, and the judges disqualified him. Those elbows to Hamill’s face cost him the win and his undefeated status.

Still, many fans consider Jon Jones to be undefeated. He has never submitted or tied with another fighter. Other than the Hamill fight, the man owns a clean record. He sports 22 clean wins to account for that technical loss.

What you can read next